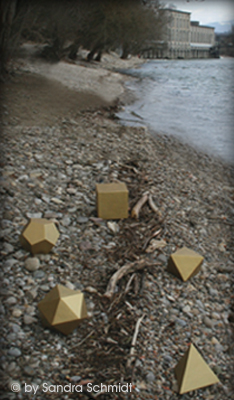 The old Rheinfelden hydroelectric power station (1898-2010) was a technical pioneering achievement and an important industrial monument. It was demolished at the end of 2010 as well as the old iron bridge that linked Germany to Switzerland.

In the series called “Lost Place”, I would like to remember the familiar place which gave me a “home feeling”. I was able to make very special landscape installations in the last few years, in the > picture gallery some works are to be seen.

In 2010, I designed a stamp for D / CH to keep the old hydroelectric power station. The limit of the stamp depends on the demand, it will possess the corresponding collector value. Inquiries / order by >Mail.